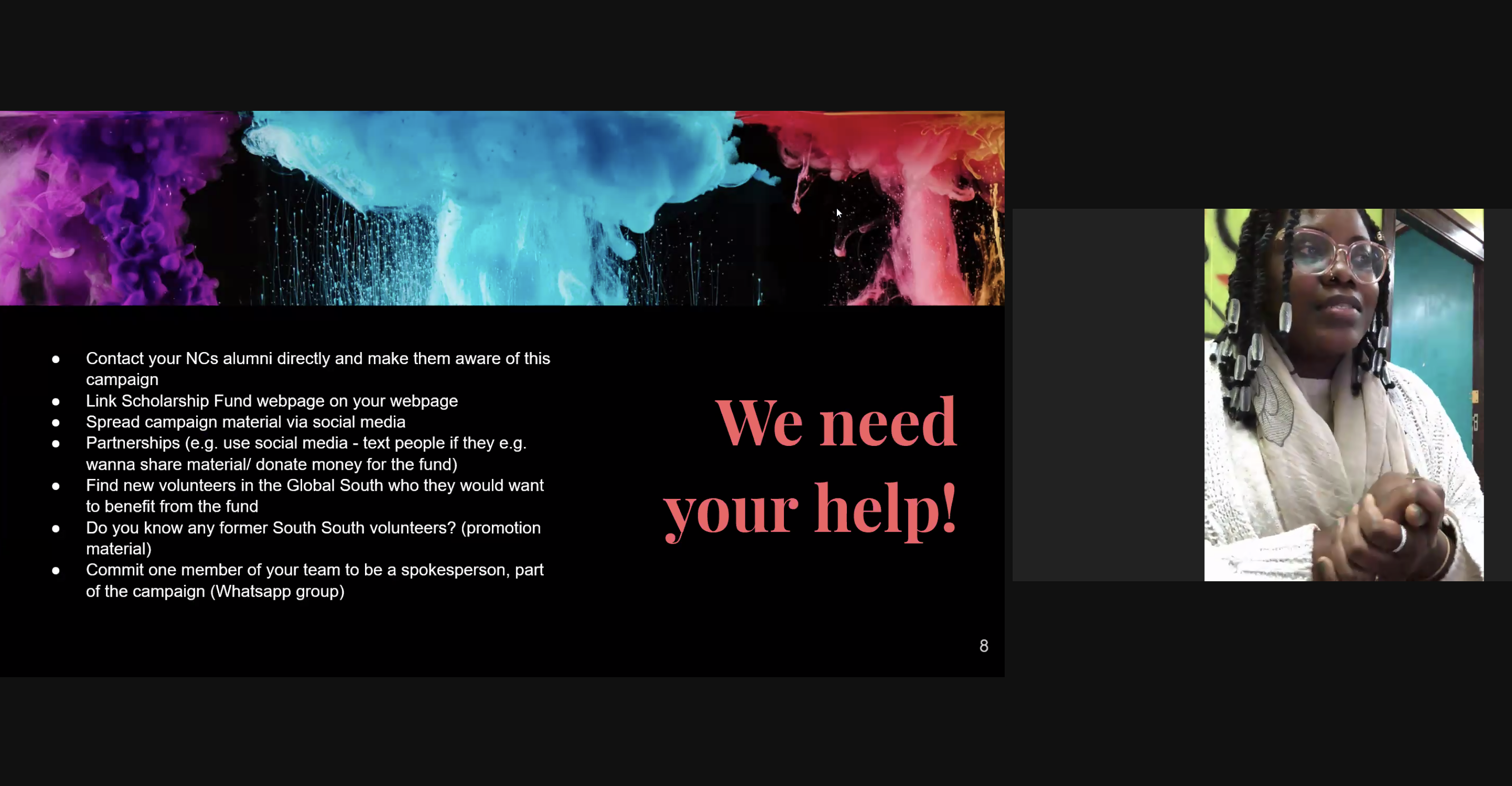 The international ICYE network aims at leveling the global playfield by setting up a new scholarship fund – the South-to-South Scholarship Fund – for volunteer exchanges between countries of the Global South.

Each year ICYE Finland sends up to 40 volunteers out into the world, most of them young adults between the ages of 18 and 30. Similarly, the organisation receives annually around 30–40 young volunteers from various parts of the world. Many of these volunteer exchanges take place through the international ICYE network.

In 2021, the federation of International Cultural Youth Exchange (ICYE) consists of 39 member organisations (sometimes called ‘national committees’), all representing ICYE in their respective countries. The ICYE network seeks to promote intercultural understanding, equal opportunities, tolerance and peace by providing young adults participating in the program with challenging learning experiences in a foreign country. Another important goal is to promote the personal growth of the participants of the program by providing the opportunity to participate in international volunteering programs.

On an annual basis, up to 700 people carry out their international volunteer exchanges within the ICYE network. Most of these volunteer exchanges take place between the countries of the Global North and the Global South. Participation costs are typically offset between national organisations using program fees paid by participants: each national organisation receiving a certain amount of compensation for hosting a foreign volunteer. Sometimes local activities are funded also through project funding, such as cooperation with the European Solidarity Corps.

“The South-to-South Scholarship Fund was founded to bridge the economic gap that exists between young people in the countries of the Global South and the Global North.”

Within the federation, the relative lack of volunteer exchanges within the Global South was first taken note of in the early 2010s. In fact, between 2015 and 2018, less than one percent of a total of 2778 volunteer exchanges took place between two countries of the Global South. A deeper examination revealed the main reasons for this disparity to be structural: the federation found that there are no financially supported programs in the Global South within the ICYE network (while, for example, in 2015, 91 percent of German volunteers enrolled through a state-sponsored volunteer program); in addition, travel and visa costs are often relatively more expensive for participants coming from the Global South, and their flight routes often compile into imposingly massive collections of connection flights.

The federation organised workshops around this theme of disparity to find out where the federation could best intervene. One result of these workshops was publicised in the summer of 2021, when ICYE announced the launch of a global scholarship fund for young people in the South called the “ICYE South-to-South Scholarship Fund”. We asked two members of the South-to-South Scholarship Fund working group to tell us more about ICYE as a federation, and the newly announced fund, and its background.

First off, who are you? Please tell us something about your work in the ICYE network.

Courtney: I started working at the international ICYE office in Berlin in early 2021. I have previously worked in the volunteer sector in the field of environmental protection. My volunteer history began 15 years ago in Kyrgyzstan with the U.S. Peace Corps where I met lovely people in the activist field. And the South-to-South fund has definitely been the favorite theme in my current work! The COVID-19 period has affected the beginning of my time in the office in a challenging way, namely with the lack of face-to-face encounters with the people with whom I work, but luckily the internet connects me well to both my local and international colleagues.

How does the international ICYE network function? What kind of decision-making and executive structures does the federation have?

Courtney: ICYE consists of a federal structure where its members, i.e. national organisations, are independent actors. Simultaneously, however, each organisation is dependent on its partners. Such a structure requires partners to trust each other. Shared values, jointly developed agreements and policies help build and maintain trust between organizations. We have a lot of faith in the solidarity within the network. The biennial General Assembly, with representatives from each national organisation, decides the broad lines and direction of action of the network. The ICYE Board, composed of representatives of national organisations, is responsible for implementing the decisions of the General Assembly. The Board is elected for two years at a time and meets twice a year. The ICYE International Office in Berlin is responsible for developing the volunteering program and cooperation networks on the practical level. For success in cooperation, it is crucial that the actors themselves are involved in creating the rules so that they themselves believe in the common principles. ICYE’s decision-making system is therefore very horizontal. It has its advantages, but the downside may be a sluggishness of decision-making. For different working groups, such as those set up around this fund, the pace of assembly can be much faster, as required.

Mercie: I like to compare the role of the international office to a backbone. National organisations act like the limbs of the body and the international office ensures the functioning of the limbs. It is true that the governing style of the ICYE network takes its own time, but I appreciate its democratic nature. It is also important that the representatives of the member organisations themselves choose to be involved in the development of the federation, and ICYE provides a good foundation for this. However, each individual brings their own views into the mix on how to develop policies. I find that working in a multicultural network also teaches a certain kind of cultural humility, which is a valuable skill in international cooperation.

How did the South-to-South Scholarship Fund get started?

Courtney: The ICYE network has been keeping its eye on the relative sparseness of volunteer exchanges between countries in the Global South. In effect, there is a huge gap between the number of North-to-South exchanges and South-to-South exchanges. Many of the root causes of the problem are structural, starting with challenging flight routes and expensive travel costs, but much could also be done to change attitudes. Today, there is a growing awareness and interest in various aspects of social justice, and ICYE wants to play its part in the development. We found that one of the most substantial things we can influence is our own support systems. Consequently, the South-to-South Scholarship Fund was founded to bridge the economic gap that exists between young people in the countries of the Global South and the Global North. We also certainly have a part in replaying neo-colonial structures – despite better intentions – and the federation is trying to do what it can to ensure that we do not strengthen these structures further in the future.

Mercie: Indeed, through my own work I have noticed how much work there is to be done especially in changing the attitudes of local youth towards volunteering, other than South-to-North. Funded voluntary exchanges between countries of the Global South would make it more attractive for young people to visit other countries in the Global South. Often, when heading from South to North, people seek other opportunities in life in addition to gaining volunteering experience. As the Global South as a destination for volunteering increases in attractiveness, cultural exchange and experiences will hopefully also diversify. I hope that as a result countries of the Global South will find more young people, richer from their volunteer experience, willing to return to their respective home countries, thus slowing down the infamous ‘brain drain’ effect.

What hopes do you have for the impact of the South-to-South Scholarship Fund?

Mercie: One of my hopes is that the local offices of the Global South of the ICYE network would no longer be so heavily dependent on volunteers from the Global North and the program fees they pay. International volunteering is a great opportunity to gather professionally useful skills, and often there is a lot of personal growth taking place along the way as well. I hope that with the help of this new fund, we will bring in more young people into volunteering through the ICYE network, and that ICYE will gain more recognition as a globally influential organization within the field of international volunteering.

Courtney: I hope that in the future we will have an increasingly diverse set of participants, and there no longer would be the need to come from a well-off family to gain international volunteering experience. At a more general level, it would also be great to see local ICYE offices receive funding tied to increasingly local contexts and be less dependent on European funding.

Screenshots: In August, ICYE organized for ICYE organizations an online info event on the lauch of the fund.

How can you donate to the South-to-South fund?

Would you like to practice speaking in Spanish, Finnish, or...

📢 Calling for three cooking lovers to volunteer in our...

NICEHEARTS was established in 2001 with the aim to produce...