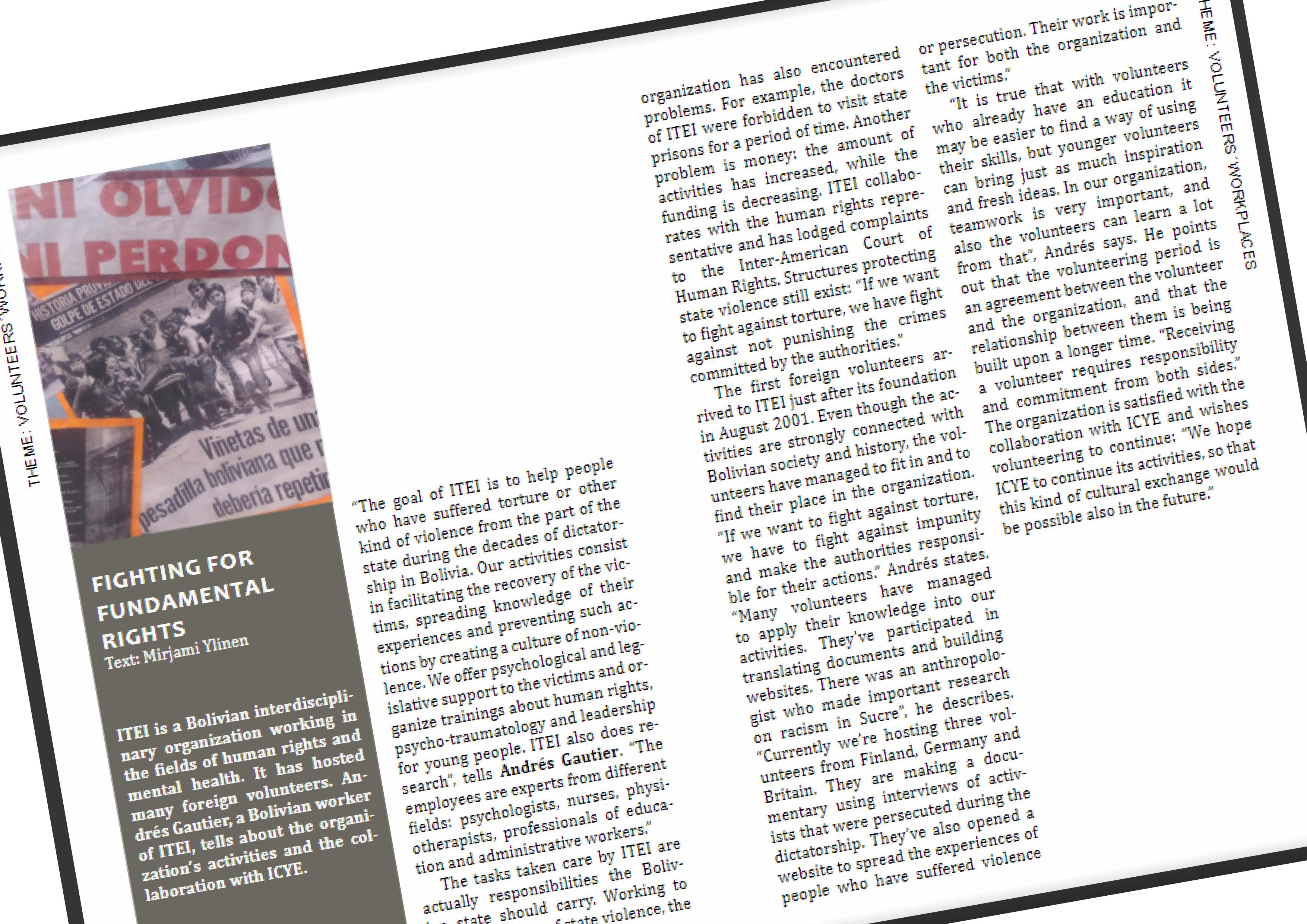 ITEI is a Bolivian interdisciplinary organization working in the fields of human rights and mental health. It has hosted many foreign volunteers. Andrés Gautier, a Bolivian worker of ITEI, tells about the organization’s activities and the collaboration with ICYE.

“The goal of ITEI (Instituto de Terapia e Investigación) is to help people who have suffered torture or other kind of violence from the part of the state during the decades of dictatorship in Bolivia. Our activities consist in facilitating the recovery of the victims, spreading knowledge of their experiences and preventing such actions by creating a culture of non-violence. We offer psychological and legislative support to the victims and organize trainings about human rights, psycho-traumatology and leadership for young people. ITEI also does research”, tells Andrés Gautier. “The employees are experts from different fields: psychologists, nurses, physiotherapists, professionals of education and administrative workers.”

The tasks taken care by ITEI are actually responsibilities the Bolivian state should carry. Working to help the victims of state violence, the organization has also encountered problems. For example, the doctors of ITEI were forbidden to visit state prisons for a period of time. Another problem is money: the amount of activities has increased, while the funding is decreasing. ITEI collaborates with the human rights representative and has lodged complaints to the Inter-American Court of Human Rights. Structures protecting state violence still exist: “If we want to fight against torture, we have fight against not punishing the crimes committed by the authorities.”

The first foreign volunteers arrived to ITEI just after its foundation in August 2001. Even though the activities are strongly connected with Bolivian society and history, the volunteers have managed to fit in and to find their place in the organization. ”If we want to fight against torture, we have to fight against impunity and make the authorities responsible for their actions.” Andrés states. “Many volunteers have managed to apply their knowledge into our activities. They’ve participated in translating documents and building websites. There was an anthropologist who made important research on racism in Sucre”, he describes. “Currently we’re hosting three volunteers from Finland, Germany and Britain. They are making a documentary using interviews of activists that were persecuted during the dictatorship. They’ve also opened a website to spread the experiences of people who have suffered violence or persecution. Their work is important for both the organization and the victims.”

“It is true that with volunteers who already have an education it may be easier to find a way of using their skills, but younger volunteers can bring just as much inspiration and fresh ideas. In our organization, teamwork is very important, and also the volunteers can learn a lot from that”, Andrés says.

“It is true that with volunteers who already have an education it may be easier to find a way of using their skills, but younger volunteers can bring just as much inspiration and fresh ideas. In our organization, teamwork is very important, and also the volunteers can learn a lot from that”, Andrés says. He points out that the volunteering period is an agreement between the volunteer and the organization, and that the relationship between them is being built upon a longer time. “Receiving a volunteer requires responsibility and commitment from both sides.” The organization is satisfied with the collaboration with ICYE and wishes volunteering to continue: “We hope ICYE to continue its activities, so that this kind of cultural exchange would be possible also in the future.”

The article has been published in Volunteers’ Voices 4/2014.

Towards Meaningful Meetings in Volunteering

In international volunteering the participants learn through daily co-operation. At...

Communication can clear the gap between generations

Pham Minh Tuan has his story to tell about a...