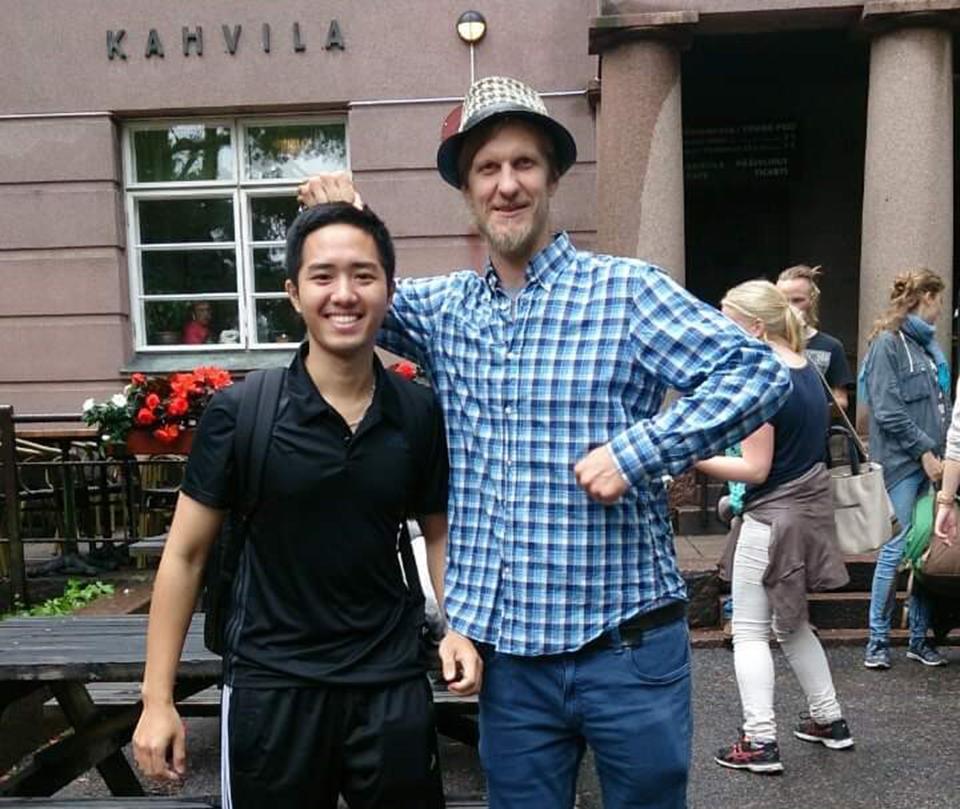 Pham Minh Tuan has his story to tell about a jump from Vietnam to Finland and from Millenial’s comfort zone to a house of the elderly. Let’s discover his volunteering year in Finland!

Back in 2016, when studying in college in Vietnam, Tuan was thinking about doing something boldly and differently in a meaningful way. He decided to do volunteering abroad and eventually chose Finland as a destination. Finland was familiar to Tuan since his sister had come to Finland to study long time before and he had got a chance to know Finland little by little through her stories.

Even though he had prepared himself for the cold, darkness and quietness, it still took him some time to adapt to this new life. Maybe it is not a surprise that person who comes from a warm, vibrant Vietnam with one hundred million people, got a bit of a culture shock by quietness in Finland where everybody respects the individual space of each other.

“In Vietnam, when you step outside your house in the morning, you will see a lot of people talking; neighbours greeting each other, people chatting while eating breakfast from street vendors. We usually have small talks even if we are strangers to each other”, Tuan tells.

Time went by and Tuan found for him a solution to overcome this culture barrier. That was communicating and opening up himself. By doing so, he realized that Finnish people are very warm, kind and friendly. He felt more comfortable to approach and talk with people who he worked with and met in events and streets. Tuan had learned a lesson for life: every problem can be solved by communication.

A friend for the elderly

At Palvelukoti Sofia, Tuan’s tasks included helping old people with their daily routine like eating, walking, self-cleaning. Most of all he was a friend to them.

“I started my workday at 8.15 by helping the elderly take their breakfasts. After they finished, I washed the dishes in the kitchen and moved to the second floor. There me and my colleague helped the old people in “Ryhmäkoti” where the elderly are supported also by nurses. Around lunchtime we returned to the kitchen and after finishing lunch and cleaning the kitchen, we went to Ryhmäkoti again to help the nurses. My workday used to end at 13”, Tuan tells.

Working with old people brought Tuan a pleasant experience of communicating between generations – Millennial and people of the 1930’s and 40’s. Since most of the elderly did not speak English, he had to seek help from his Finnish colleagues or from using body language in his first weeks, which sometimes caused miscommunication.

Later on, Tuan learned basic Finnish words related to his daily work in order to better communicate with the elderly. Observing Tuan trying to learn Finnish, old people were happy to teach him more. As the result, their talks improved and the topics went beyond daily routine.

“I learnt that caring is the best way of communicating with the elderly as well-being is their top concern when ageing”, Tuan tells. Thinking that way, every morning he come to work, he used to ask them how they were doing.

Tuan liked to hear the stories  of the elderly and in return  he shared his future plans and asked for valuable advice.

In Tuan’s opinion, communication between Millennial and old generations would never be hard if we thought that every old person is a book about their life waiting to be read and discovered. Therefore, he was always eager to hear stories about what they had experienced and learnt in the past. In return, he shared his future plans with them and asked for valuable advice. Voluntary period at Palvelukoti Sofia brought Tuan a lot of special memories, experiences and lessons learnt.

After a year of volunteering, Tuan decided to pursue nursing degree in Finland, which enables him to provide the care for people in need. He sends a message to all young people: “Go boldly and don’t be afraid. The world out there is waiting for you to discover it. Volunteering abroad is a once-in-a-lifetime experience you never want to miss!”

In the photo: Pham Minh Tuan travelled from Vietnam to  Finland to volunteer in an elderly care home.  Tuan (left) and Maailmanvaihto’s camp leader Markus in the on-arrival training camp in 2016.

The article has been published in the magazine MaailmanVaihtoa – Volunteers’ Voices 1/2019.