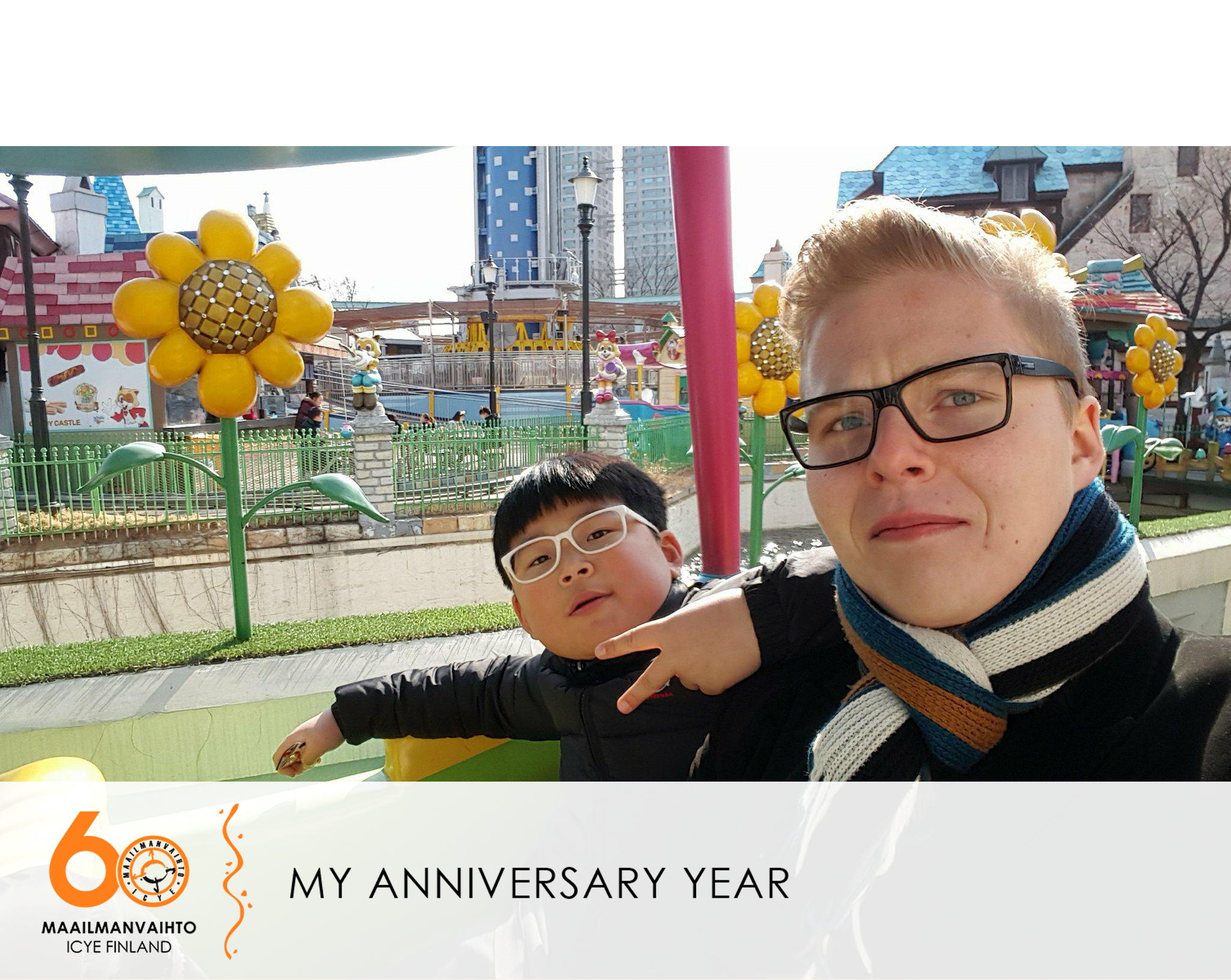 Last August Jussi Poikkeus left for South Korea to volunteer for a year. Now, around the midpoint of his volunteering period he feels he has learned a lot about the world as well as himself.

1. Hi Jussi! What kind of tasks has did you have in March?

From the beginning of the project, my work tasks have been very structured; each day of the week follows its own agenda. For example on Mondays I work in a library and in a restaurant for retired people, but on Wednesdays I spend my day in a kindergarten. On top of these tasks, my week includes supporting children with disabilities and teaching English to seniors. March hasn’t differed much from the previous months in regard to work tasks; still, I’ve noticed that I’ve gotten more responsibility.

2. What are your expectations for the rest of your volunteering period as well as the year?

Now that’s a tricky question! Of course I’m hoping to develop my skills in Korean even more, but I wouldn’t dare set the bar too high anymore. My priority is to create more lasting friendships with locals. When I get back home in autumn, I’m planning to continue my studies at the university, including the Korean language.

3. Maailmanvaihto is working to advance intercultural understanding. What do you think is the volunteers’ role in this?

Maailmanvaihto’s activities have their base in volunteering, so the role of the volunteers in building intercultural understanding is substantial. The volunteer is often perceived as a representative of their home country and culture, which is why their acts and behavior are viewed in relation to the conception locals have of those things. However, this doesn’t mean that we as volunteers should carefully plan our every step, but rather bring forward our cultural attributes as we see fit.

Volunteering opens the door to the so-called grass-roots level of daily life, which for example an ordinary tourist can’t access. Working with local people offers a glimpse below the surface, which helps to understand the traditions, cultures and beliefs of the destination country better than tourist attractions.

4. How would you like to see Maailmanvaihto’s activities evolve in the future?

I think Maailmanvaihto is already a very nicely functioning organization. I guess I’m a bit lame for not coming up with anything to improve. Maybe that’s a good sign. Still, if I have to say something, I hope that Maailmanvaihto remains a small organization. For us volunteers it’s comforting to know that we are looked after in our home country!

5. What is your own experience of intercultural learning in Maailmanvaihto’s activities?

It’s hard to describe how much the past six months have taught me. For my part, intercultural learning has covered more than just Finland and South Korea, as I spend a great deal of my time with other volunteers, especially with my French flatmate. The local cultural environment shares many common features with Finland, but it also has its differences. I think here respect and being considerate towards others is something else entirely. For example, even though the metros are often crammed, people make room for everyone who wants to get in.

Three amongst a multitude, right. Well, internationality, expanding your worldview and finding yourself. Before participating in the volunteering project I used to dream about living abroad; because of the project I finally had a chance to do that. It is still impossible to say how much my understanding of the world has changed during my stay, I believe I’ll notice that better after I have returned to Finland. I would say the same thing about myself; I’ve learned to read my mind and find new aspects of my personality, but the process will be brought to an end in Finland. Happiness is found in the daily life, small acts matter and you learn from your mistakes. I don’t regret coming here a bit, thank you Maailmanvaihto.

Finally, your greetings to the 60-year-old Maailmanvaihto?

Let’s continue in the same way and not let the fire die down despite the old age. Congratulations Maailmanvaihto 60 years!

Photo: Jussi enjoying the weekend off with his colleague’s firstborn son.

Jussi participates in International Cultural Youth Exchange program (ICYE), where volunteers work for 6 or 12 months in Asia, Africa, Latin America or Oceania. As an ICYE-volunteer you get to see the world and build intercultural understanding on a grass-roots level. Read more about ICYE!

English lessons and club activities at a primary school

In April, Max Schodry was looking forward to volunteering for...

A glimpse of a host family’s new ordinary

A new position as chair and the first meeting

How has the 60th anniversary year of Maailmanvaihto begun? Roosa...