Maailmanvaihto celebrates its 60th anniversary in 2018. This page is dedicated to the events and contents of the anniversary year. Let’s make a memorable year together!

A lot has happened in sixty years. Maailmanvaihto started as a student exchange organization in 1958. Over the years the organization’s activities have evolved into the current form: organizing international voluntary work opportunities for young adults.

Throughout the years we have worked for advancing intercultural understanding. Also during the anniversary year at the core of our activities are interaction and co-operation which creates understanding between people.

As the focal point of the anniversary year, we are organizing a celebration on the August 25th 2018 in Mustasaari island in Helsinki. Everyone who has taken part in Maailmanvaihto’s activities in the course of years is warmly welcome! At the celebration we get to enjoy a tasty meal as well as speeches and other entertainment, such as a photography exhibition compiled as a part of the anniversary year.

There are a limited number of seats, so make sure to secure your spot at the best party of the summer soon!

Let’s make our 60 years visible together!

The 60th anniversary year of Maailmanvaihto is filled with different kind of activities – and people! This article series presents once a month what’s going on in the lives of people connected with the organization.

January: Roosa Kontiokari‘s January consisted of getting accustomed to her new position as the chair of the board as well as running the first meeting of the year.

February: Last August Salla Jarkkola, Tuukka Kosola and their children became a host family to Marija, a volunteer from Latvia. Their February went by in an ordinary fashion.

March: Last August Jussi Poikkeus headed to South Korea for a voluntary work year. In the middle of his voluntary period he felt he had learned much about the world and about himself.

April: In April, Max Schodry was looking forward to volunteering for the last month at a Finnish primary school and experiencing the summer in Finland with his host family and friends.

60 years of making a difference 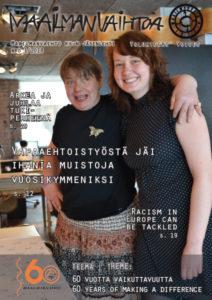 The theme of the MaailmanVaihtoa – Volunteers’ Voices 1/2018 is 60 years of making a difference. The issue mainly consists of articles written in Finnish, but you’ll find something to read in English as well!

Have you participated in Maailmanvaihto’s activities? Which kind of memories do you have of it? What have you learned and realized through the activities? And how are you doing nowadays? What are your greetings to the 60-year-old organization?

If you have taken part in our activities, please post your greetings in your social media channels! The hashtags for the anniversary year are #maailmanvaihto60 and #60yearsoffellowship.