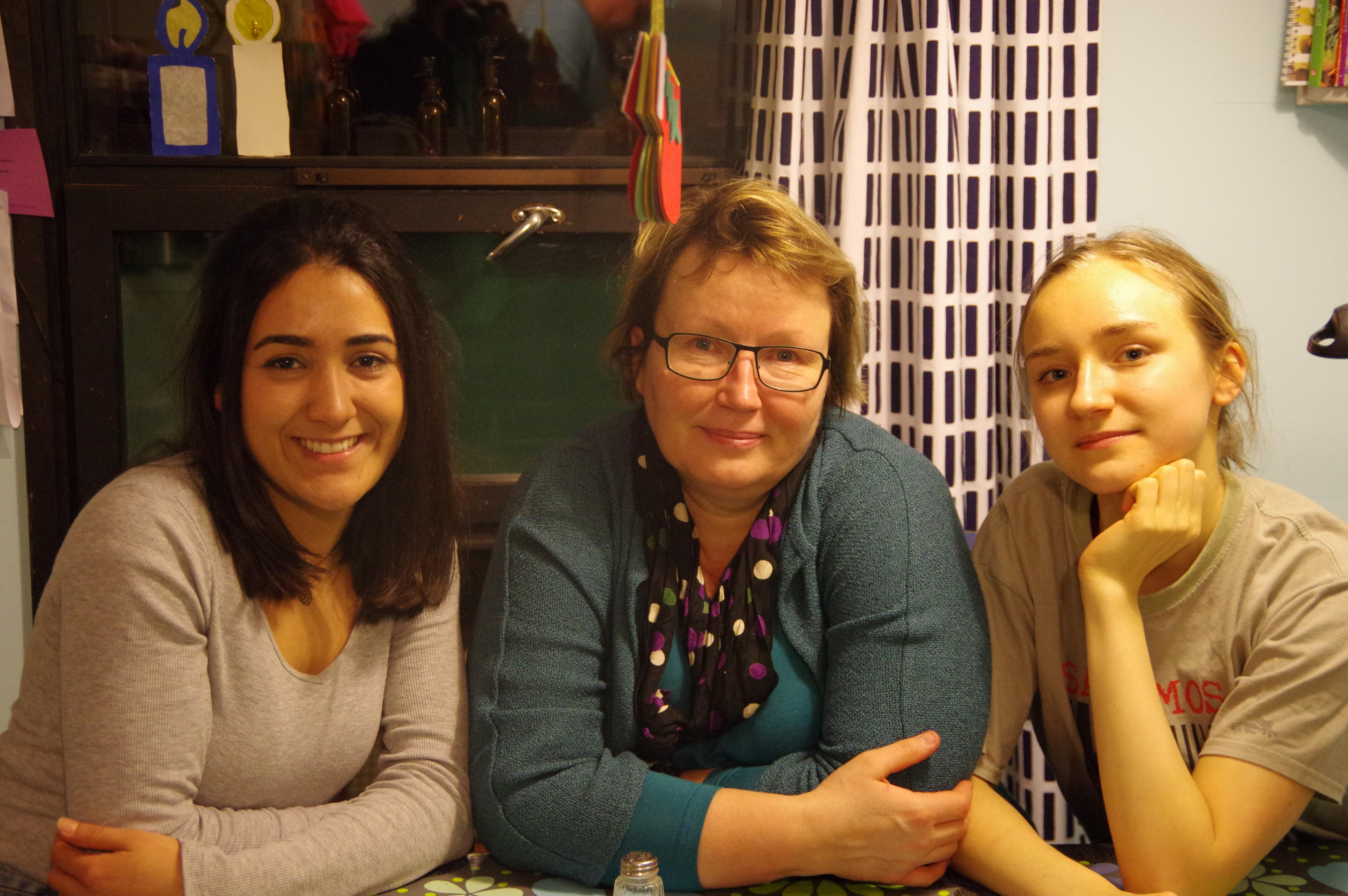 All the volunteers who have lived with us have arrived somewhat fast.

At the World Village Festival in May 2016, we run into an organization called Maailmanvaihto, presenting material about the possibility of becoming a host family for three young adults from the 15th of June. Our teenage daughter got excited, and so did we. We thought that becoming a host family is going to happen quite fast – in three weeks – but on the other hand, why would have we needed more time? Maybe it would have been useful regarding the sleeping arrangements at our house. After a family meeting and a consultation with Maailmanvaihto we found out that we would start as a host family in mid-August, so we ended up having more time for all the arrangements.

Esra from Turkey arrived to live with us in August. She was a youngster who had decided to take a gap year after her studies. She adapted to our family wonderfully. Her openness and willingness to learn about a new culture and a Finnish family and way of life were great starting points for her adaptation process. Practical help was needed: how to handle the paperwork at the magistrate, how and where to get a bank account from and most of all how to get a telephone subscription – since friendships and family ties are kept tight with internet phone calls and social media – were all issues we helped her with. As was guiding her with the ways of the public transportation in Helsinki: In the subway you won’t get lost, since the options in the Y-shaped subway system are very few. Buses and trains don’t wait for those who run late, in the traffic lights you have to wait for the green light before you cross the street etc.

Food is a big integrative factor. Esra was fine with everything, but especially gravlax and mushrooms tasted good, which was fantastic. For a person used to a more meat-based diet, the shift to a lacto-ovo-vegetarian diet went – at least based on our observations – smoothly and pleasantly. There had to be potato, which we understood as a basic ingredient in cooking at least in that part of Turkey where Esra comes from. We were dreaming of interactively getting to taste Turkish foods one day, and with the help of Esra’s mum’s recipes that dream came true one day. Delicious Turkish coffee we got to enjoy many times.

Getting used to the climate in Finland took its time. We warned Esra about the darkness of November and told her that it makes also the Finns feel gloomy. The darkness felt strenuous for Esra, too. She told us she was wondering what we were talking about when we were telling her how much more light there is when the snow comes. Until the snow came and it was sooo much lighter outside. When you’ve only experienced snow occasionally, its significance and features are naturally hard to imagine. About two pairs of jeans were ruined before it was internalized that sprinting to the bus stop in the winter is deceitfully slippery compared to taking that same sprint during the time the ground isn’t covered by ice. The silence, light and beauty brought by snow and the importance of dressing in layers – all these experiences were meaningful and new.

Openness as a starting point

Esra had a close relationship with her family and she trusted that also the new family will support her. During her year in Finland we discussed feelings of homesickness and shared our joys and sorrows. We prepared and enjoyed a traditional Christmas – Esra’s first – and ate mämmi (a traditional Finnish Easter dessert made from rye flour). We celebrated birthdays and Midsummer and visited relatives and friends together. Esra’s best friend also came to visit us for a week. And sauna – it was never too much or too often. 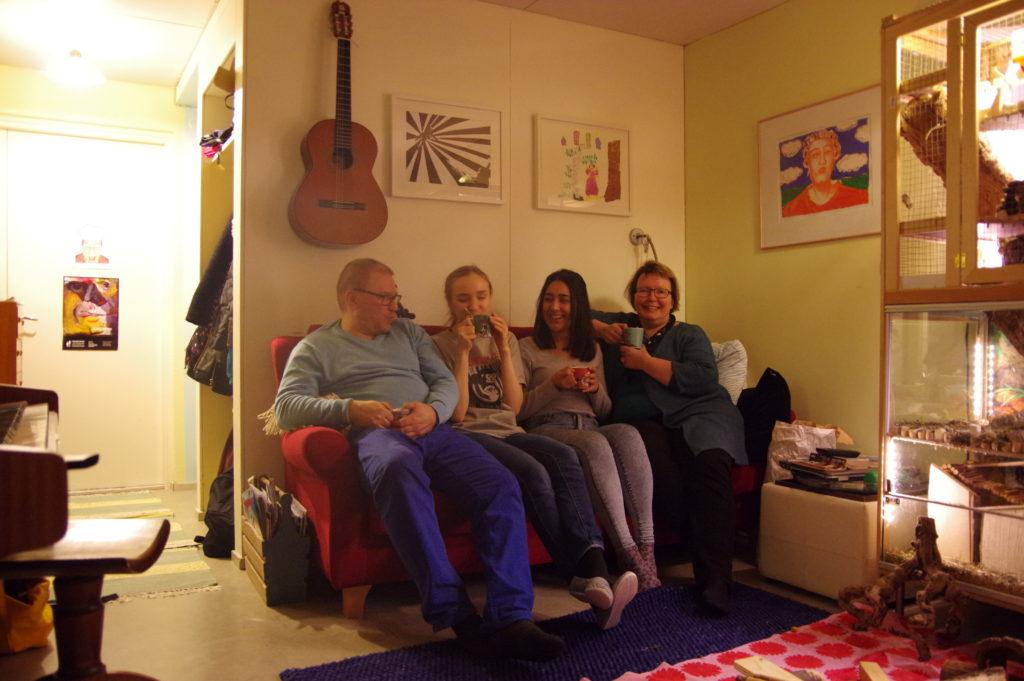 What, then, is the guarantee for a good year as a host family? I think it all boils down to being open and wanting to challenge your own preconceptions, being interested in others and cultural diversity, wanting to exchange experiences and views and most of all being prepared to talk and ask. With Esra, we shared the same values of appreciating the significance of family, honesty, trust and conversations. They were much more important than where you’re from or where you have grown up in.

“Supporting the growth of a young adult in a foreign land away from familiar environments and relationships called for, at least from me, a lot of emotional work, sharing and being present. But I thought it was magnificent and unique. I wouldn’t give away this experience.”

What did that year require? Work. We don’t host a Bed and Breakfast, this is a family and you come here to be a part of it. Supporting the growth of a young adult in a foreign land away from familiar environments and relationships called for, at least from me, a lot of emotional work, sharing and being present. But I thought it was magnificent and unique. I wouldn’t give away this experience. We are still in touch with Esra and we have still shared our lives’ turning points with her.

In December 2018 we were a host family to Ayako, an over thirty-year-old person, who needed a temporary host family for three weeks. Ayako fit our family like a glove from the first minute. Might her life experience gathered with age have something to do with this, who knows. It was incredibly enjoyable to exchange thoughts and experiences with her during her stay at our house.

Ayako wanted to make something nice for a Christmas present to her long-term host family and colleagues at the voluntary work place. And when she came to present her idea – frosted gingerbread cookies – to me, bingo and no problem! Finally, I got to put my around sixty different cookie molds and various piping tubes into use after my daughter had, after years of making gingerbread cookies with me, grown out of it. With Ayako, we set up a gingerbread cookie factory for a week in our kitchen. Maybe the family got fed during that time – I can’t remember. But gingerbread cookies, they were a lot – and so pretty! My own and Ayako’s best ideas got realized in the shape of Moomins, wreaths, snowmen, Christmas trees – you name it! Amidst of that all we discussed this and that. 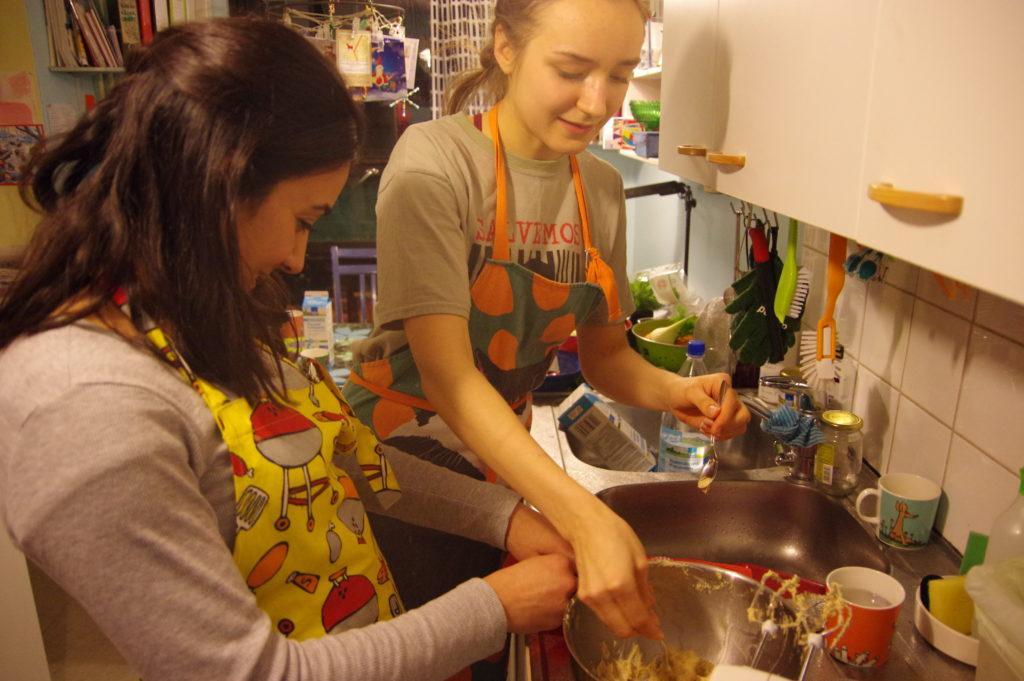 I remember telling Ayako how we traditionally celebrated Christmas in my childhood: went to the graveyard, visited relatives, went to church, ate too much, opened presents… and in the middle of my storytelling she abruptly said that just like with us, going to the graveyard, visiting relatives, going to the temple, eating too much… That’s that from the differences; surely the biggest celebration of the year is in many ways different between Finns and Japanese people but the content, people and values are very much the same.

Mariam came to live with us last summer for the last three months of her voluntary year. This quicksilver from Georgia put the unvacuumed dust on a roll in our house. On her best nights she did three rounds of bike riding on our old Nopsa bicycle before getting all her energy out of her system. When with Esra we went through Finland and Finnishness step by step, Mariam was, after her eight months in Finland, already ready-made, so major practical advice wasn’t needed – except for guiding the bike routes in the beginning. She did a better and more thorough job in mapping them than me in twenty years, though.

We had great conversations about the history of our countries – for us the war was a part of our grandparents’ lives, but Mariam and her family have firsthand experience of it. In Finland she had eaten fish for the first time and salmon had become her favorite, but the warm milk in kesäkeitto (traditional vegetable soup cooked in milk with butter) would have required much longer training. In the beginning of August Mariam went back home, but we are still in contact through Whatsapp.

“What, then, is the guarantee for a good year as a host family? I think it all boils down to being open and wanting to challenge your own preconceptions, being interested in others and cultural diversity, wanting to exchange experiences and views and most of all being prepared to talk and ask.”

Our home is not big and one combined toilet and bathroom sets restrictions for the use of it in the mornings – showers in the evenings, please. Noises echo through our not-huge house, so put your headphones on, late night TV programs should not be loud and you can’t hang out in the kitchen having discussions long into the night, since in that case the people in the room above will also stay up. But these same arrangements have worked for years during the overnight visits of our friends and family.

The shower had to be isolated with an extra shower curtain to cover the tiling on the wall – an old house is not dense enough when it’s inhabited by two young ladies active in sports and two middle-aged people trying to remember to do sports every now and then. All the members in our blended family have gotten along well with our degus (moles), since the degus can roam around freely in our living room in the evenings. All family members have also helped with everyday household chores.

In the pictures Outi’s family and Esra.

Do you want to hear about experiences of international volunteering...